The reason for the big toe becoming angled to form a sore lump is not known for sure. Laxity of the ligaments and tendons is the most plausible explanation, while narrow shoes probably play no role in it. It is much more common in women and often occurs in relatives. 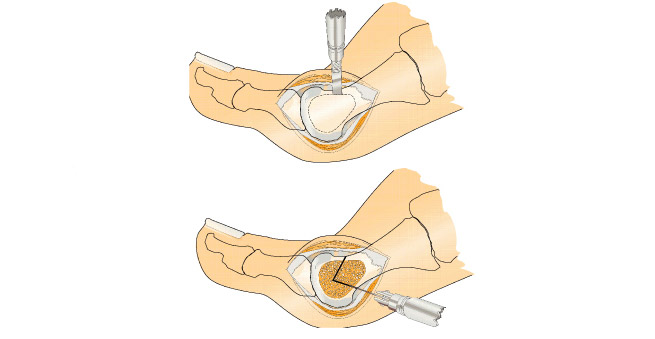 1. The lump is partly sawn off. 2. The bone is sawn through. 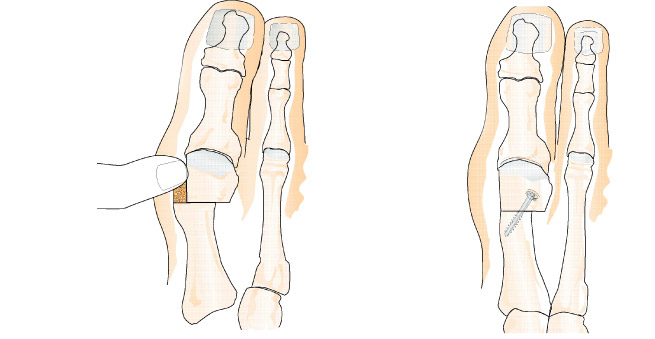 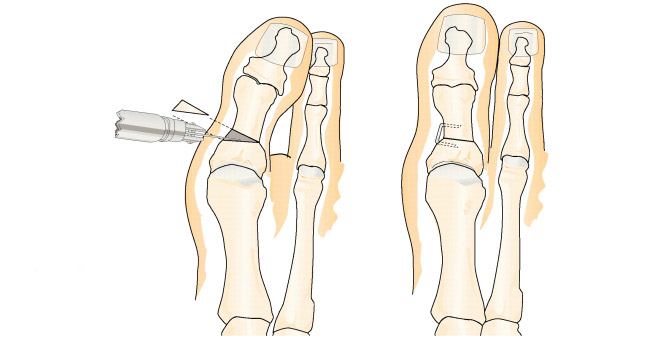 5. To straighten the big toe properly, a wedge of bone may be removed on the inside.
Previous Next

Most patients complain that their shoes rub over the lump on the inside. Only old broken-in shoes will do. Symptoms may begin insidiously but often become pronounced eventually. There is no specified time when it is time for surgery. It varies from case to case. Pain, difficulty in managing work and shoe problems are factors that come into play. There is no need to operate on a trouble-free foot for preventative purposes.

The aim of an operation is to make the forefoot narrower. To achieve this, it is not enough to carve the lump, as it will usually return. The bone above the joint head (the bump) must be cut off – “create a fracture” – and the joint head moved about 5-10 mm towards the little toe side. In this new (narrower) position, the joint head can heal permanently, which takes about 5-6 weeks. To keep it in place during the healing period, the joint head sometimes has to be fixed with a screw, which does not need to be removed later. The most common surgical method in Sweden, a Chevron osteotomy, produces great stability which means that you may put your full weight on the foot from the beginning. Plaster of Paris treatment over the big toe is sometimes used. In the event of a pronounced deformity of the toe, a wedge of bone can also be removed on the inside of the toe so that the toe is straightened.     This operation is secured with a staple that can be left where it is.

All operations on the big toe lead to swelling around the toe afterwards, and there is a risk of reduced mobility after surgery. It should be assumed that the toe will be so swollen that you will be unable to use regular shoes for about 2-3 months. Sick leave time in a job that involves walking is about 6 weeks.

As a final result, you can expect a permanently narrower forefoot and thus less shoe discomfort. The toe is usually straighter after the operation but the condition can easily return later.